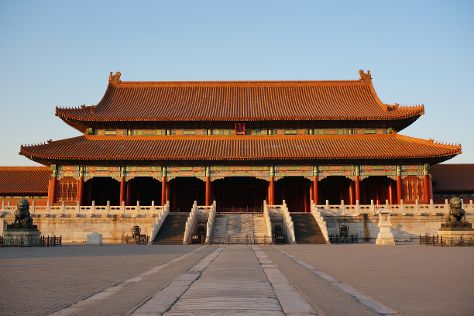 As the political and cultural capital of China, Beijing stands at the heart of Chinese history, buzzing with the energy of its high population density and centuries of importance.

Do some cultural sightseeing at The Palace Museum and Summer Palace (Yiheyuan). Head to Chinese Imperial Post and Three Shadows Photography Art Centrefor some retail therapy. Take a break from Beijing with a short trip to Baili Canyon Resort in Laishui County, about 1h 55 min away. There's lots more to do: take an in-depth tour of Lama Temple (Yonghegong), ponder the world of politics at Temple of Heaven, identify plant and animal life at Yougushentan Scenic Resort, and stroll through Back Lakes (Hou Hai).

For more things to do, maps, and tourist information, use the Beijing trip builder site .

If you are flying in from South Korea, the closest major airports are Beijing Capital International Airport, Beijing Nanyuan Airport and Tianjin Binhai International Airport. January in Beijing sees daily highs of 2°C and lows of -10°C at night. Cap off your sightseeing on the 19th (Sat) early enough to travel back home.
more less

Things to do in Beijing